TJK Tug-of-war-The Power of a Rope 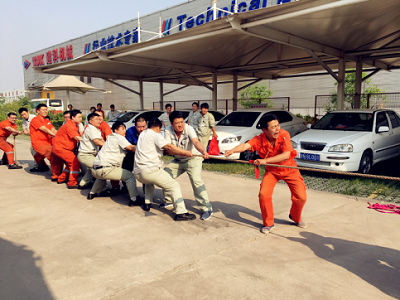 In the course of the competition, the team members worked hard, whether on or off the court, the atmosphere was extremely tense. The rhythm of the roar, the sound of cheering, filled with the company and reverberated for a long time. Especially when it's a close call, everyone didn’t retreat, and they clenched teeth and clenched the long ropes,along with the sound of the mouth, tried to keep it to the end. The players in the arena were full of fighting spirit and used their sweat to tell us the meaning of unity. Their tenacious perseverance and the spirit of fighting made everyone moved.

The cheerleaders on the site were all enthusiastic, their shouting match added a shine to the game and every shout brought a force! After a fierce competition, the war bureau was finished and the event was a complete success.

This competition demonstrates the good spirit of our employees, which is conducive to enhance the cohesion and centripetal force of employees in various departments, and help employees to establish a positive and optimistic attitude towards life.
Related News